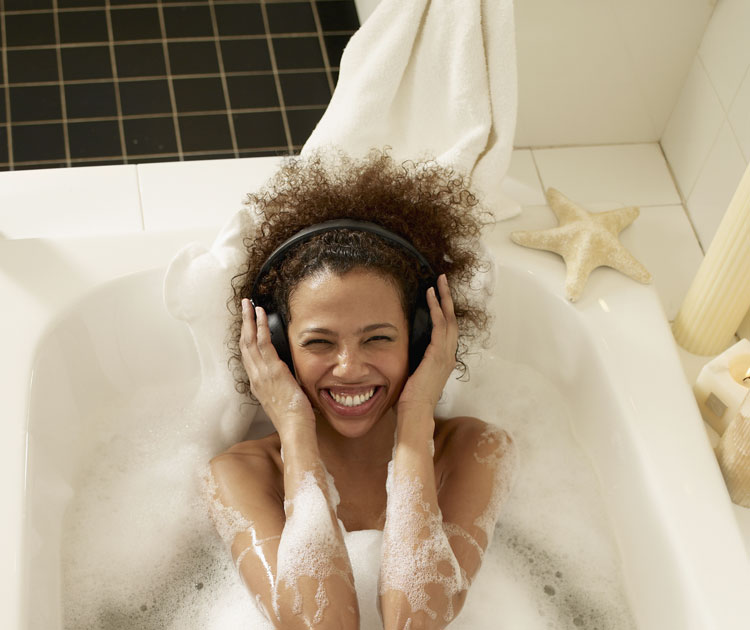 3 Ways To Sneak in Me Time

Me time. In a world that’s constantly coming up with new ways to connect, how are we ever supposed to get off the grid? Jet-setting to a remote beach or tucking yourself in at a wooded cabin for a week just isn’t a reality for most of us. So what do we do to reconnect with ourselves, even if only for a few minutes? Here are three ways to sneak in some much-needed me time.

I know, sounds cliché, right? We don’t live in a Calgon commercial, after all­. Up until a couple of days ago, I thought the same thing. Until I tried it. Guys, don’t stop reading here. I’m talking to you too!

The bathroom has never been a place of respite. I’m either rushing through a shower to make it somewhere on time or mopping up puddles of water after bathing an overzealous 4-year-old boy. But after a particualrly hectic week of work, soccer practices, laundry, and little sleep, something in me snapped.

I had just walked in the door from the grocery store and was carrying way too many (bags because I’m one of those people that hates making two trips). My shoulders and back were screaming, and I didn’t know if I’d be able to wobble my way to the kitchen when I felt something blast me in the face. I flinched and dropped the bags to the floor, cans and glasses clinking.

I looked up to see my son and husband cowering behind the couch, eyes peeking nervously over the edge. The tip of a plastic sonic blaster revealed itself as the culprit.

“Sorry mom,” my son said feebly, his eyes darting side to side. He knew I didn’t like those things in the house.

I didn’t respond, just looked at my husband and said, “I’m going to take a bath.”

As I sat there reveling in the silence, I realized that this was the first time I had truly been alone for more than five minutes in quite a while.

And off I went, leaving a pile of produce and popsicles behind me. I didn’t look back, but I could almost feel my husband’s look of confusion. I never took baths. I actually scoffed at them. Who has time to wait for a bath to fill, to then just sit there stewing in… whatever? But here I was, turning the water as hot as I could stand it and pouring in some lavender stuff I’d had forever. I eased in and sat back, letting bubbles float up to my chin as I rested my head against the tub.

Hmmm, this was surprisingly comfortable. I scooched down a little further, hot water covering my shoulders, and I breathed in and let out a long, deep breath I hadn’t even realized I had been holding. And then I just sat there. There wasn’t any music — or cartoons or crying or chatter. Just silence, except for the ticking of the bathroom clock. All I needed were some candles and the perfect messy bun, and I really would be living in a Calgon world.

As I sat there reveling in the silence, I realized that this was the first time I had truly been alone for more than five minutes in quite a while. Even in most car rides, I had the company of a toddler. It was weird and amazing all at the same time. I had no idea how much 15 minutes of bubbles and silence could restore my sense of self.

My reverie was broken by the squeals of laughter from my husband and son in the distance, but I emerged from my impromptu bath time feeling refreshed, and smelling pretty darn good.

Slip Into Something Uncomfortable

A few years ago, I got a breathless call from my brother.

“Raegan,” he said, between gulps of air. “I just got done doing this hot yoga thing. It’s 90 minutes of yoga, but you’re in a 106-degree room with 40 percent humidity. You have to try it!”

My silence must have indicated my clear concern with everything he had just said: Hot. Humid. Yoga. And 90 minutes? There were very few things I spent 90 minutes doing, and sweating in a dog pose — or whatever it was — was certainly not one of them.

“Seriously,” he said after I failed to reciprocate his enthusiasm. “It’s awesome.”

Much to my own disbelief, less than 24 hours later, I was signing in to a hot yoga studio, a borrowed mat and towel under one arm and a gallon of water under the other. My brother had convinced me to try this insanity by appealing to my love of a good bargain: unlimited access to classes for 30 days for $29. One class was pushing $30, so I figured why not? I’d spent more on worse things than a good sweat.

Thirty minutes into class, I felt like I had just gotten out of a pool. Drops of salty liquid came out of every pore and onto my mat and towel. The tank top I had worn was now in a soggy heap next to my water bottle. I was never one of those people who strutted around the gym in a sports bra and spandex capris, but today I had zero shame. Within those 90 minutes, not only did I discover a new appreciation for bare midriffs, but I also realized I was pretty good at yoga. The teacher actually called me a natural. I beamed like a fifth-grader who just won the spelling bee. My brother was right; this was awesome.

After that first session, I went back about 15 times within my 30 days. I saw improvements in my postures and finally understood what yogis meant when they claimed to be “centered.” I began to crave my time on the mat. My me time.

Months after my first hot yoga class, I actually became a certified yoga and Pilates instructor.

I had so much success with the yoga that I was inspired to try other new things. I took a hip-hop dance class, I painted while drinking wine, I tried float therapy, I sat in a salt cave, I made some pottery, I took archery. I even did one of those escape rooms. It was exciting to see what new adventure may spark a passion I didn’t even know I had. Months after my first hot yoga class, I actually became a certified yoga and Pilates instructor — which terrified me at first, by the way — and I got to do it all by making time for myself.

If you’re anything like me, when it comes to grocery shopping, you have tunnel vision. You have a list that goes in the order of the aisles so that you don’t have to backtrack across the store for butter. You don’t stop to check out the cute displays or literally smell the roses as you walk by the floral section. You get what you need and get out.

And I’m telling you to stop. Try to allow yourself a few extra minutes in your day to go off-list and browse. If you love the fresh cheese section in the deli, let yourself peruse the varieties of Parmesan and havarti and halloumi. Maybe even ask for a sample! Or if you have a penchant for those K-Cups, go ahead and take the time to discover a new flavor. Cinnamon Toast Latte, anyone? 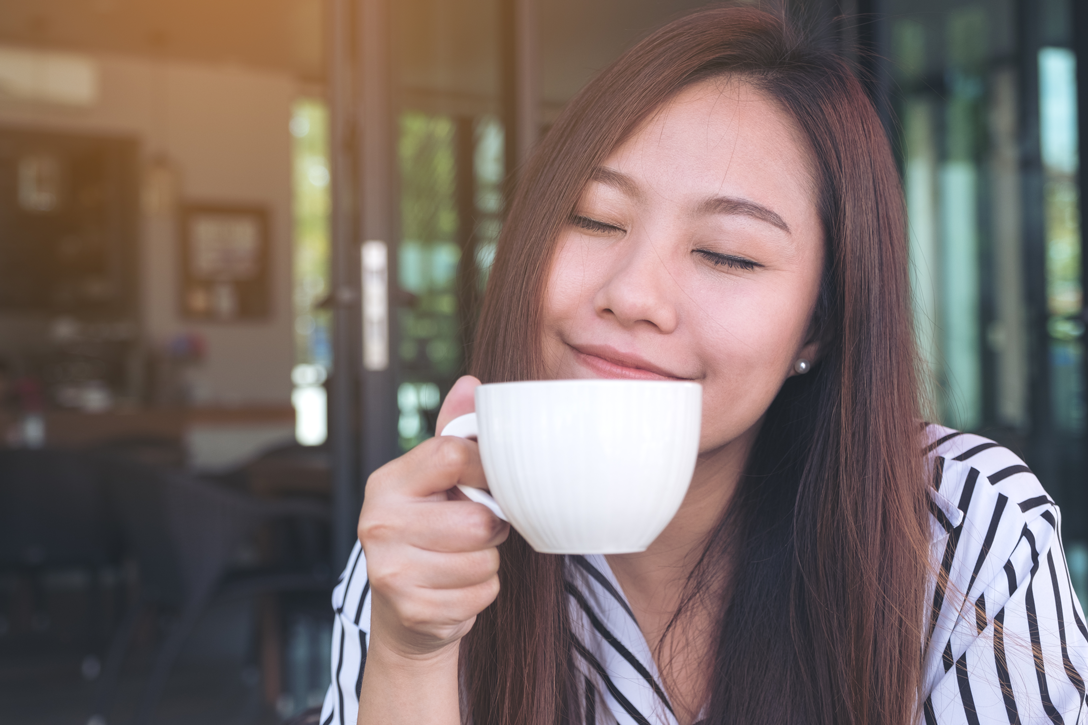 This works for anything, really. Whether you’re shopping for groceries or clothes, or just running a slew of errands, give yourself a few extra minutes to do something you don’t need to. Put a little fun into your routine!

See, me time doesn’t have to mean an expensive vacation or day at the spa (although both sound amazing!). All you need is a few extra minutes in each day for you. It can even mean flipping through one of those terrible gossip mags in the checkout line or walking to get your coffee instead of hitting the drive-thru. Just allow yourself the chance to deviate from your everyday routine once in a while, and the results may surprise you!

Five Ways To
Unplug And Reconnect
Eight Tips For The Best Stay-At-Home Vacation Ever
Music:
It’s More Powerful Than You Know